As Verizon Demands Huge Cuts To Worker Benefits, Its Profits Soar And Its CEO Gets $18 Million In Compensation

Yesterday, 45,000 Verizon employees, represented by the Communications Workers of America, went on strike following the breakdown of negotiations between union representatives and management on Saturday. The workers are battling a long list of concessions that the company is demanding of them, ranging from asking employees to contribute more to their health care plans to halting pension accruals this year.


Cutting workers benefits as a cost-saving measure is a natural part of a market economy when times are bad, but what is particularly outrageous about Verizon’s demands is that the company’s fiscal health is actually rapidly improving and its profits soaring. The company’s quarterly report released in January found that their profits nearly doubled from the same point last year. Then in April, Bloomberg reported that the company’s profits “more than tripled” after the company began offering services on Apple’s popular iPhone, with net income approaching $1.44 billion: 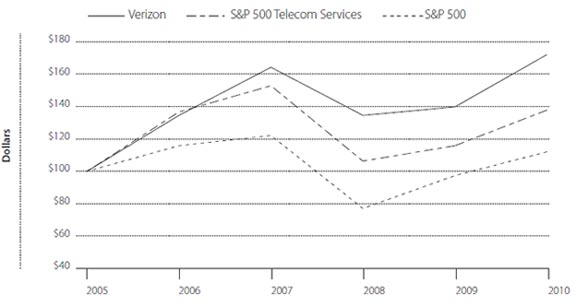 “They are outperforming the overall industry,” said financial analyst Michael Nelson of their Spring 2011 returns. Meanwhile, one person at Verizon who is not being asked to take any cuts is Ivan Seidenberg, the company’s CEO. His compensation actually rose four percent in 2010 to $18.1 million. The Communications Workers of America note that the “top five executives [at the company] received compensation of $258 million over the past four years.”

It appears that Verizon’s stockholders and executives are being treated well by the company while it demands sacrifice from its workers. “We are regular folk like most other folk out here trying to pay our mortgages, pay our bills and survive and we don’t think that is a lot to ask when the company is making billions of dollars in profits,” said one striking worker.
Posted by Hate Your Boss? at 9:30 AM