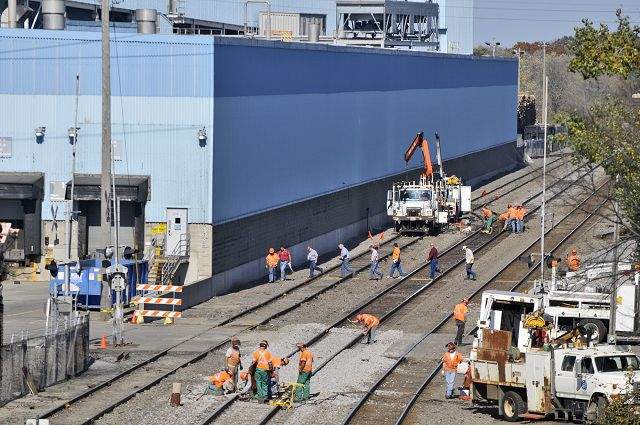 Employees walk across the railroad tracks that run through the Verso Paper Corp. mill in Sartell on Tuesday while a crew works on the tracks. The company announced a permanent force reduction of about 175 workers, amounting to a reduction in paper production of about 103,000 tons per year.

SARTELL — Two of the three machines at Verso Paper’s Sartell mill have been cranking out paper for more than 100 years. Within two months, however, they will go silent, mothballed in a move announced Tuesday that will cut jobs for 175 people at the city’s No. 1 taxpayer and No. 2 employer.

Memphis-based Verso Paper Corp. reported it is cutting annual production capacity by 193,000 tons, including a permanent shutdown of two machines in Sartell effective Dec. 14. The company also announced about 125 layoffs in a coated groundwood paper operation effective Oct. 23 at a mill in Bucksport, Maine.


The biggest impact will come in Central Minnesota, where 103,000 tons of product will be eliminated annually with the shutdown of the No. 1 and 2 machines at the Sartell mill. Those machines, called supercalendered machines, produce the type of paper used in newspaper advertising inserts. The mill will continue to operate a lightweight coated paper machine purchased in the 1980s that will produce about two-thirds of the plant’s annual business, according to Pat Gibney, mill manager. He said other support equipment also will continue to operate, though the plant won’t produce as much pulp or steam as it did in the past.

The supercalendered machines, which occupy a large portion of the 400 employees at the mill, date to before 1910. They underwent major rebuilding in the 1950s, but it was not cost effective to continue operating them, Gibney said.

“They just weren’t cost competitive,” said Gibney, who has worked at the mill since 2004. “Our employees did everything they could to keep them viable. But paper demand has been shrinking about 2-3 percent each year. Paper prices have increased 10 percent since 2005, and production costs — what we spend on energy, labor, wood and everything it takes to mix it all together — have gone up 25-30 percent in that time frame. The company couldn’t keep those machines in operation and still be competitive.”

The reduction in force of 175 people is the largest layoff involving a St. Cloud area business since Electrolux discharged 204 employees in 2004. Sartell hasn’t experienced a bigger layoff since DeZurik/Copes Vulcan announced in 2001 it was eliminating 1,018 jobs.
Posted by Hate Your Boss? at 4:00 PM