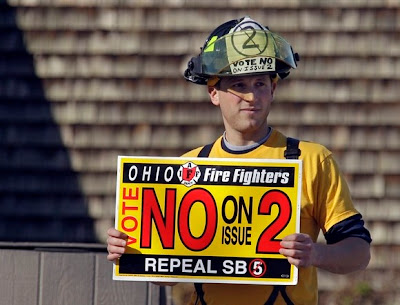 ﻿
Ohio voters have repealed Senate Bill 5, a controversial measure signed by freshman Republican Gov. John Kasich earlier this year that curbs collective bargaining for public employees. With 19 percent of the precincts reporting, the Associated Press has declared Issue 2 -- the ballot referendum to decide the future of SB 5 -- rejected with 63 percent voting no and just 37 percent voting yes. The outcome is major a victory for organized labor and Democratic activists.

CONNECTIONS POLL: Public Doubts Congress Will Aid Economy
Kasich signed the measure, which also prevented public workers from striking, at the end of March, but a backlash from liberal activists and labor prompted a push to get the measure on the ballot, and by June, a record number of signatures were collected, subsequently prompting a referendum.

What followed was an expensive campaign by coalitions on both sides of the issue. But the outcome is not a surprise; in the weeks leading up to Election Day, public polling indicated that a repeal was the likely outcome.

It's a much needed win for labor, which spent millions over the summer in Wisconsin, on a state Senate recall campaign that was also prompted by a backlash against a measure to limit collective bargaining for public employees that was backed by Republicans. Democrats picked up two state Senate seats in the Badger State, but failed to pick up a third, which would have handed them control of the upper chamber.

"Today's defeat of Issue 2 is a major victory for working families in Ohio and across the country," said AFL-CIO President Richard Trumka in a statement. "Ohio's working people successfully fought back against lies pushed by shadowy multi-national corporations and their anonymous front groups that attempted to scapegoat public service employees and everyone they serve by assaulting collective bargaining rights."

The repeal is also a blow to Kasich, whose approval numbers have already been lousy this year. Republicans in the state who supported the measure will also have to carry the baggage of vouching for something that was overturned. And looking ahead to 2012, that's something that could potentially affect races at the federal level, as Democrats will surely blast Republicans who supported SB 5 and cast its repeal as a rejection of the GOP agenda.

Likely Republican Senate nominee and state Treasurer Josh Mandel supported SB 5, and on a recent trip to Ohio, Mitt Romney seemed to provide different answers to the question of where he stood on the measure -- saying he supported it a day after appearing to distance himself.
Posted by Hate Your Boss? at 8:30 AM